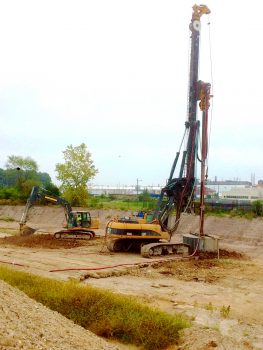 Geo-Solutions’ steam enhanced soil mixing can be used to perform thermal remediation by injection of hot air and steam.  This technique can be cost effectively used to remove volatile organic compounds (VOCs) and semi volatile organic compounds (SVOCs) and has been used successfully on a number of project sites in the last 15 years.  The process is completed using standard soil mixing auger(s) that shear and mix the soils while steam and hot air are injected through ports on the auger(s).  The steam and hot air raise the temperature in the subsurface to approximately 65° to 95° C causing thermal desorption and volatilization of the contaminants from soil particles and pores. Once vaporized, the compounds are carried to the surface with hot air, collected under a negative air pressure shroud, and then handled using ex-situ vapor phase treatment equipment.  The in situ thermal technology using steam and hot air has removal efficiencies of 90 to 99 percent for VOCs and 50 to 90 percent for SVOCs (La Mori, et al 2010).  Compared to other methods of thermal remediation, soil mixing offers numerous advantages including 100% exposure of the contaminants to the hot air and steam.  In addition to mass contaminant removal via thermal treatment, a polishing step is often performed to extend the treatment.  For example, a reducing agent like zero valent iron (ZVI) is often mixed into the soils post steam enhanced soil mixing treatment on sites with chlorinated solvents. 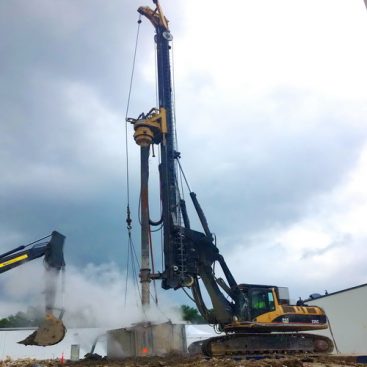