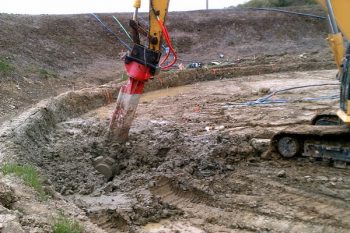 Rotary tool blending is a slightly more sophisticated variation of excavator or bucket soil mixing wherein additional mixing energy is imparted to the soils through a mixing tool mounted on a horizontal axis.  For a simplistic comparison, think of a large rototiller.  Originally the tools used for this mixing methodology were modified versions of hydraulic cutters developed for mining applications or excavator mounted stump grinders.  Now there are a few commercially available units, e.g. Allu, Alpine, and Antraquip, that are made specifically for in-situ soil mixing.

In this method, the soils are often pre-excavated with a conventional excavator as grout is added to the mixing “cell”.  Once the material has been loosened and an appropriate amount of grout has been added to the cell, the rotary blender mixes the soil and grout together as the remainder of the grout is added.  Mixing is performed in cells to ensure appropriate reagent dosage and distribution control.  In addition to being a popular choice for soil mixing, this technique is well suited for high moisture content sludge and sediment mixing, often with dry reagent addition. 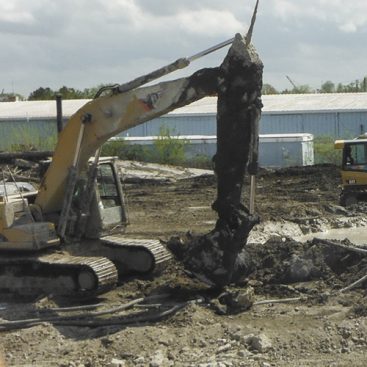