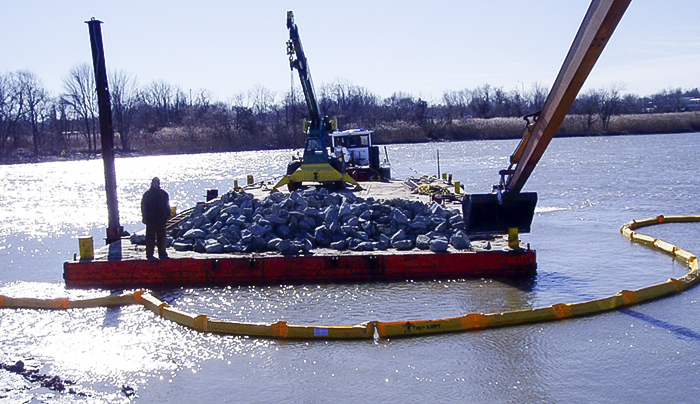 Geo-Solutions recently completed a multi-faceted total wetlands restoration project for the Riverfront Development Corporation (RDC) in Wilmington, Delaware.  The 202-acre site, once a functioning tidal marsh, had experienced significant sedimentation and damage over the years due to dredging deposits during the installation of I-95 as well as other developments in the vicinity.  The RDC contracted Geo-Solutions to restore the marsh to its original functionality as part of the marsh’s eventual transition into The Russell W. Peterson Urban Wildlife Refuge, an integral part of the RDC’s plans for the development of the entire Christina riverfront corridor. Construction began in January and continued through the winter.  Approximately 75,000 cubic yards of sediment and dredge spoil material was excavated and used to create or restore low and high marsh habitat as well as open water features and newly created uplands.  All excavated material was re-used, eliminating the need to import off site fill or dispose of the excavated material.  The work was performed exclusively using long reach excavators operating from timber mats.  The site is situated on the Christina River and several different methods were used to eliminate normal tidal influences so construction could be performed “in the dry”.  A strict schedule was necessary to avoid fish spawning and bird nesting seasons.  The project site was bordered by an active Amtrak line and was bisected by an active Norfolk Southern railway.  To be eligible to work on the project, all employees were required to complete Amtrak On-Track Safety Training and Certification.  Major features of work included the following:

Christina River Dike Breach Repair – Geo-Solutions repaired, narrowed, and stabilized four severely eroded breaches within the dike separating the wetlands and the bordering Christina River.  The breaches were narrowed and shaped by hydraulic excavator.  A layer of geotextile was placed and riprap was used to restore the original contours of the dike.  Black Willow Live stakes were then planted to provide eventual vegetation.

“Stop-Log” Water Control Structures – A total of five “stop-log” water control structures were place within the dike separating the marsh from the Christina River.  Each stop-log, consisting of a precast U-shaped concrete structure with internal brackets designed to accommodate timbers, which can be added and removed to adjust and control tidal flow into the existing channels feeding the marsh, was placed using a combination of hydraulic excavator, barge, and hydraulic crane.  Locations were excavated to a design grade, geotextile and a crushed stone base were placed followed by the stop-log structure itself.  Stop-logs structures were blended into original dike topography and riprap was placed along all disturbed areas for stability.  Coordination of work with natural tides was key for the effective placement of each structure.

Tidal Pool Creation – Two interconnected tidal pools were created within the marsh.  The two large pools, comprised of approximately 18,000 yards of excavation and resulting in over 6’ of pool depth were connected by a deep channel which was tied into the water control structures and existing channels feeding the marsh.  The pools were designed to provide open water features and fish habitat, especially during periods of low tide.  Both pools and channel were excavated using hydraulic excavators; large volume pumps were used to control water during excavation.  All spoils were reused to create upland features within the marsh.

Marsh Excavation – Approximately 75,000 cubic yards of sediment and dredge spoil were excavated to design grades throughout target areas of the 202-acre marsh.  High and low marsh areas were created to restore effective tidal influence throughout the marsh.  Spoils were placed in designated areas to provide upland island habitat throughout the marsh.

Geo-Solutions worked closely with designers Milone & McBroom and the Delaware Department of Natural Resources and Environmental Conservation (DNREC) to assure all activities met the intent and requirements of the design, and were done with as little impact as possible to existing marsh and the birds, fish and wildlife that inhabited them. 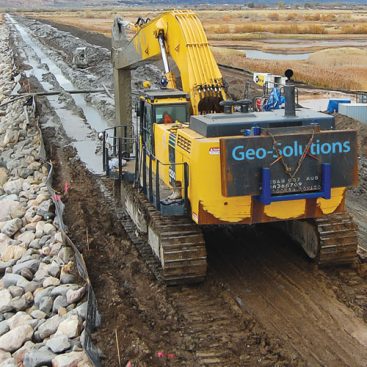 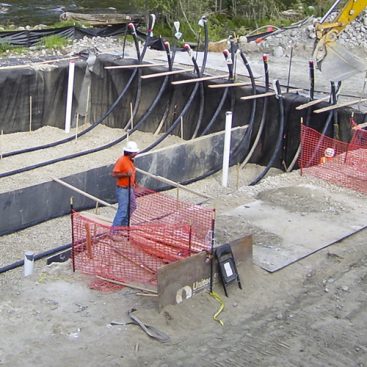 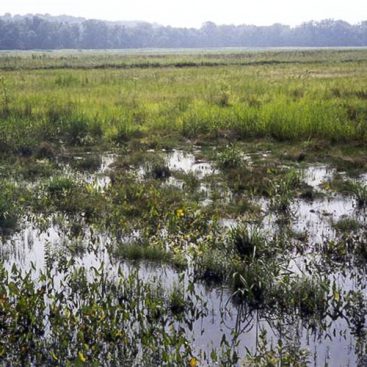